How to Fly a Loop

In aerobatics, all maneouvres stem from just a few “prime” figures and the loop is probably the most important of these since it is most prevalent. Even a Stall Turn (Hammer Head for our colonial cousins) incorporates a quarter loop at entry and exit. If you are to succeed in aerobatic competitions, it is therefore essential that you master the prime figures.

The Judging Criteria for a Loop:

As the loop must appear circular, entry and exit height must be the same and the radius must be constant. All figures start and finish from level flight. Typically judges will hold a pencil to your starting point and estimate the radius of each quarter of the loop. They will confirm you finish at your starting height and position.

How to Fly a Loop

There are many different types of loop, we are interested in the competition loop, i.e. on that looks perfectly circular from the judges perspective.

If you were flying a loop at an air display, it would be different to give the best spectacle. You would start and finish from a very low height, but have the ability to cope with an engine failure at any stage. It is a bad idea to be pulling lots of G near the ground so we would pull early and then let the aircraft sink towards the ground to give dramatic effect while preserving a large margin for safety but sacrificing perfect shape.

If you were taking your girl friend for a pleasant aerobatic trip and intending on a longer term relationship, it would be considerate to reduce the G somewhat and also to reduce the negative G at the top. The result would be a “granny loop” or egg shaped loop but also a happier girlfriend. (don’t be one of the many idiots that fly passengers without consideration making them feel sick and putting them off aerobatics for life )

The key consideration for a competition loop is to ensure that each quarter loop is the same radius as the first quarter. We will presume the loops to be into wind.

Dive for speed (45 degrees). Then come level at your chosen speed, which will vary according to aircraft type. For the Extra a good speed is 150 knots (2.5 x Vs).

Fly level for a second or two and note your height and a landmark or line feature straight ahead. Look at your left wing sight and see where it cuts the horizon, then ease the stick back, straight with no aileron, pulling approximately 5 G while continuing to look at the left wing sight and keeping it pegged to the horizon. You are setting the radius of the loop in this first quarter.

As the speed reduces and you begin the second quarter you must maintain the same radius so smoothly reduce the pressure on the stick. At the top of the loop you should be floating at half of 1 G and approximately 50 knots.

As you start the third quarter, allow the speed to increase and increase the back pressure. If you pull too hard at the beginning the extra drag will delay the speed increasing.

As the speed increases increase the back pressure more, remembering to keep looking at the wing tip and keep the sight pegged to the horizon. When you reach level flight, look at the altimeter and confirm you are at your starting height and on your starting heading.

Of course, the ball should be perfectly in the middle throughout the loop. It is important to keep looking at the wing tip, so you are not able to use the ball as a reference. In practice you use your body as the ball but also see if the wing tip moves forward or backwards to indicate aircraft yaw. The judges cannot see if your ball is in the middle. On entry when you are fast, you will need a little left rudder (clockwise prop) to balance the power and a little left rudder when you pull to counter the gyro. As the aircraft slows down you will require a little right rudder and then as the aircraft speeds up you will again need a little left rudder. In the Extra the rudder movement required is small and is not a high priority when first starting.

Getting a perfect circle is not easy and cannot be properly judged from inside the aircraft without a reasonable amount of experience. In the early days you must fly with an instructor that has significant competition experience and trust what he tells you. Later you will get critique from the ground.

Starting at a high speed and pulling 5 G will make establishing equal radii in all 4 quadrants easier. 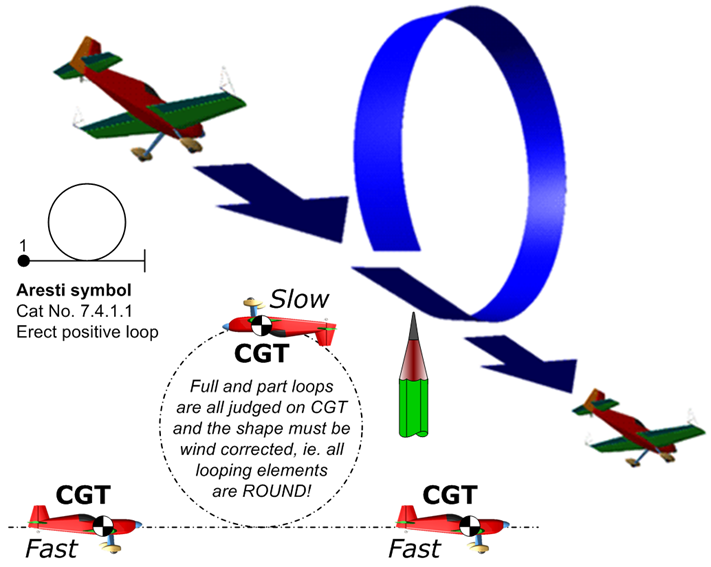 Understand where the wind is coming from and adjust the float for it.

The well-flown loop is something to take pride in. If you learn properly at the beginning, it will lay the foundations necessary for competition success. Give the British Aerobatic Academy a call on 0771 2864413 or email Adrian at Adrian.Willis@BritishAerobaticAcademy.com and book a lesson while availability is still excellent.