A well executed flick roll (called ‘snap roll’ in the USA) is a truly spectacular figure.  It should be explosive and dramatic but also meet the judging criteria. The figure is executed so rapidly that it is difficult to judge. In an effort to improve judging accuracy, judges can allocate a “Perception Zero” or PZ. This means that the judge believes the aircraft did not flick but if other judges score the figure, the judges personal scoring mark, is not degraded. This little quirk means that it is quite easy to average a low score!  The reality is that at world level unlimited competitions, the pilot who can most consistently flick well is likely to win.  It is therefore absolutely critical to perfect this figure. 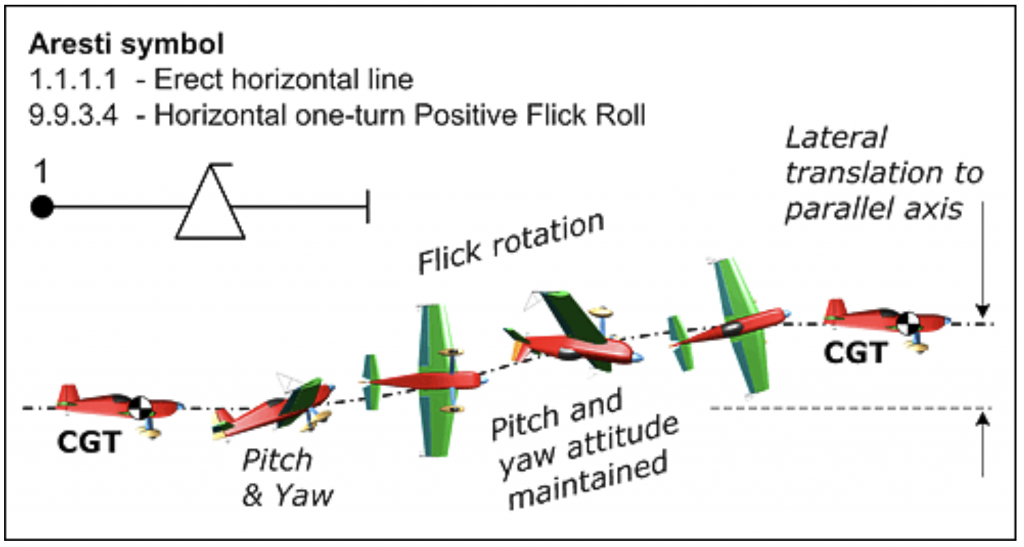 Flick Rolls exert enormous forces on the aircraft structure. These forces increase exponentially with speed. All aircraft have a maximum flick speed (flick limiting) and this should not be exceeded under any circumstances. In an Extra Flick limiting speed is approximately 138 knots and in the GenPro, the highest performing modern aircraft, Flick limiting is 175 knots. This is particularly important when learning flicks on a down line and another good reason to be careful when recovering from flat spins. Flick Rolls are a figure that needs to be taught by a good aerobatic instructor. If you try learning it yourself you will burn enormous amounts of fuel and end up very frustrated and probably full of bad habits that will take a long time to unlearn.  Book you lesson with the British Aerobatic Academy!

The stick should be very swiftly pulled back so that the angle of attack is rapidly increased to just below critical, i.e. almost stalled. When you feel the weight hit your back side, you then kick hard. This rapid application of rudder causes the rear going wing to stall and the forward going wing  to have lots of lift causing a massive rate of roll.  As soon as the roll starts, the stick should be pushed forward to further increase the rate of roll. When the roll is complete, opposite rudder should be applied to immediately stop the roll.  At no stage during the roll should aileron be applied or rudder be removed.

Learning to flick well takes a lot of practice. In effect you are training your reflexes and muscle memory. Unfortunately if you practice to much in any one session, you will get tired and you will be teaching yourself the wrong muscle memory. It is best therefore to practice little and often. If you flick at a high airspeed (below flick limiting speed) it is brutal on the airframe, brutal on you and all the inaccuracies are hidden. In short, you are likely to avoid learning the subtleties that are so critical to this figure.  It is best therefore to start learning in stages, first level at 100 its.  Keep practicing at this speed until they are really good, then increase the speed to 110 its and then 120 knots. You will find that at each different speed, you will be required to use a slightly different technique.

At the entry to the flick roll the aircraft MUST –

Flick-rolls happen so rapidly that it is the individual judges subjective ‘perception’ as to whether the two essential components – pitch and yaw – have been successfully applied to cause auto-rotation, and removed at the right moment to stop it. It is not possible to test the presence/absence of these ingredients from a video, so if you believe they were absent you must use the Perception Zero (PZ) rather than the Hard Zero (HZ).

Of course it is best to learn this figure with an experienced instructor. Feel free to contact Adrian.Willis@BritishAerobaticAcademy.com or 0771 2864413 to book a lesson in our Extra 200. This contains some content with kind permission from the BAeA https://www.aerobatics.org.uk